The Annual Conference of the Department of Biomedical Science (March 22, 2018) this year was dedicated to immunology, with the title “Novel Perspectives in immunological research”. One of the attendees, the CNR associate Aldo Tagliabue, has prepared a meeting report for CIN and all those who could not be present.

The 2018 annual conference of the CNR Department of Biomedical Sciences was held on March 22nd at the CNR Auditorium in Piazzale Aldo Moro, 7 in Rome, and it was entitled “Novel perspectives in immunological research”. The choice of this subject was the consequence of the remarkable progresses that immunological studies have reached in the last decades, which resulted in important innovative approaches for therapy of several diseases, in particular in oncology.

Thus, the introduction of the Department Director Tullio Pozzan already made the large audience aware of the importance of the results the invited speakers were going to present, also to testify the quality of the Italian immunology school. 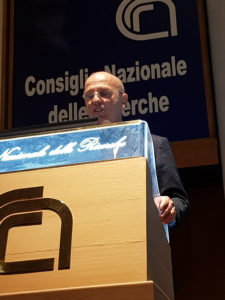 The first lecture was given by Francesco Cucca from the Institute for Genetics and Biomedical Research (IRGB) in Cagliari and it was entitled “Genetic variants regulating immune cells in health and diseases”.  For several years the IRGB group has been studying human genetic variants from whole-genome sequencing of about 6000 individuals from Ogliastra, a region in South-east Sardinia. In fact, in this island variants that are extremely rare in the rest of the world can reach high enough frequencies to provide clear but also unexpected biological insights. Although Sardinians have one of the highest rates of centenarians in the world, they also have the highest incidence rates of multiple sclerosis. Cucca presented results about the genetic factors associated with multiple sclerosis in Sardinia. He described a novel insertion–deletion variant of TNFSF13B (encoding BAFF), which results in higher BAFF levels owing to resistance of TNFSF13B mRNA to degradation by micro-RNA. This variant results in enhanced humoral immunity and is associated with an increased risk of multiple sclerosis and systemic lupus erythematosus. The increased incidence of this TNFSF13B variant in the Sardinian population appears to be the result of a selection process. Cucca’s conclusion is that carriers of the variant have an increased fitness and resistance to malaria, which was endemic in Sardinia until the 1950s.

Then, Giuseppe Matarese from the Department of Molecular Medicine of the Federico II University in Napoli (associated to the Institute of Experimental Endocrinology and Oncology, IEOS) gave a lecture entitled “Metabolic control of immunological tolerance and susceptibility to autoimmune diseases”. Following the increasing epidemiological evidence showing that the prevalence of autoimmune disorders in affluent countries has reached epidemic proportions, Matarese has analyzed the inverse relationship occurring between frequency of infectious diseases and the incidence of autoimmune and allergic diseases. He underlined that the increase in hygienic conditions combined with vaccinations

and introduction of antibiotics determined a great reduction in infections, the major health problem of mankind since its appearance in the world. This led to an exceptional prolongation of life expectancy, which only in the last century has increased by 35 years. The side effect is over-nutrition. Matarese’s hypothesis is that we are now subjected to excessive daily caloric intake and excessive metabolic workload, which in turn modulates immunological tolerance. His study of immuno-metabolism focuses on the mechanisms regulating the impact of metabolism on lymphocyte activity and induction of autoimmunity. For instance, the adipose tissue is long known to release adipokines, either pro‐ or anti‐inflammatory factors bridging nutrition and immune function. Furthermore, it has been shown that the metabolic state of an organism has an impact on lymphocyte physiology and activity. T helper cells (in particular Th1 and Th17) are among the effector cells responsible of an inflammatory environment, through the release of inflammatory cytokines, while regulatory T (Treg) cells are directly responsible of inhibiting the action of Th1 and Th17 cells thereby orchestrating T cell homeostasis and the suppression of auto‐reactive responses. At the central core of autoimmune disease development, the balance between Th1/Th17 and Treg cells gets disrupted, with Treg becoming defective and Th1/Th17 cells being abnormally activated. At the opposite side of the spectrum, a vicious cycle between malnutrition and infection has been long recognized. The main reason for this phenomenon is that the biological processes involved in mounting an immune response are highly energy‐dependent, hence the immune function depends on an adequate food intake. Thus the strategy of alleviating or actually reverting autoimmune disorders in humans by fasting-mimicking diets is among the most promising new potential therapeutic approach for these pathologies, but caution is still necessary, especially regarding the feasibility of food deprivation in our species. 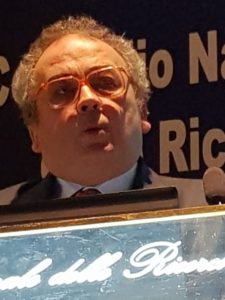 Michele Maio from the Center for Immuno-Oncology, University Hospital of Siena, gave a lecture entitled “Cancer immunotherapy : the fourth strategy”.  This strategy in fighting cancer, the immunotherapy that comes after surgery, radiotherapy and chemotherapy, is the final result of a long series of studies. The first evidence for immunotherapy was provided in 1891 by William B. Coley, who injected streptococcal organisms into a patient with inoperable cancer. He thought that the infection caused by the bacteria would have the side effect of shrinking the malignant tumor. Since then, immunotherapy has been the dream of immuno-oncologists for many decades. For its full exploitation, it was however necessary to wait until very recently, with the description of immune checkpoints, proteins capable of modulating/controlling immune responses. Immune checkpoints can control the initiation of a productive immune response and prevent the onset of autoimmunity. Tumors have developed the capability of activating certain immune checkpoint pathways, consequently inhibiting the immune activity in particular that of tumor-specific cytotoxic T cells. Based on this notion, the recent immunotherapeutic strategies target the checkpoints that block T cells, thereby re-activating the T cell-dependent anti-tumor activity. Examples of checkpoint molecules are cytotoxic T lymphocyte antigen 4 (CTLA-4 or CD152, and its ligands B7-1 and B7-2), an inhibitory protein found on immature T cells, and programmed cell death 1 (PD-1 or CD279, and its ligands PD-L1 and PD-L2), important in controlling immune responses by inhibiting hyperactive T cells. The ability to interfere with the inhibitory function of the checkpoint molecules CTLA-4 and PD-1 in oncology has proved successful.  The first FDA-approved drug against an immune checkpoint was the anti-CD152 monoclonal antibody Ipilimumab in 2011 for melanoma. The anti-PD-1 antibodies Nivolumab and Pembrolizumab were approved in 2014, and the anti-PD-L1 antibodies Avelumab and Durvalumab in 2017.  It is now clear that when checkpoint proteins are blocked, the “brakes” on the immune system are released and T cells are better able to kill cancer cells. Michele Maio and his team are strongly involved in performing large trials with some immune checkpoint inhibitors to treat cancer. In his lecture he showed very encouraging results in the newly opened pathway of cancer therapy. As a take home message, Maio showed that the immunotherapeutic approach with checkpoint inhibitors has transformed in few years metastatic melanoma from being incurable to a 3-year survival rate surpassing 50%. 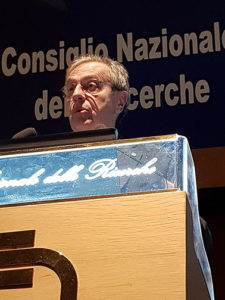 The final lecture, given by Lorenzo Moretta, from the Pediatric Hospital “Bambino Gesù” in Roma, was entitled “Natural Killer cells: from receptors to therapy of high risk acute leukemia”. At the beginning of his presentation, Moretta remembered his brother and life-long co-worker Alessandro, with whom he made important scientific discoveries. Alessandro passed away a few weeks before the meeting as a consequence of a lung tumor, and we all mourn his premature departure.
Moretta’s lecture went back to the discovery of NK cells in the mid 1970s, when it was shown that this subpopulation of lymphocytes was able to kill certain tumor cell lines, while sparing healthy cells. The observation that murine NK cells could kill a lymphoma cell line that had lost the expression of MHC-class I antigen, but not the parental MHC-I+ cells, prompted Moretta and coworkers to propose the “missing self” hypothesis to explain the molecular mechanism of NK activity. In the 1990s, the group identified two 58 KDa molecules (p58.1 and p58.2) expressed on the NK cell surface and regulating NK cytolytic activity upon cross-linking. These molecules belonged to a novel family of receptors, subsequently defined killer Ig-like receptors (KIR), capable of engaging their specific HLA-I ligands and induce NK cell inhibition. While this occurs in an autologous setting, in an allogeneic setting, e.g. haemopoietic stem cell transplantation (HSCT), a fraction of donor NK cells may express KIR that do not recognize the recipient’s HLA-I molecules (alloreactive NK cells). 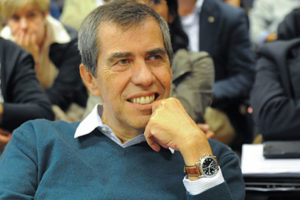 The translational impact of Moretta’s discoveries revealed soon to be of major importance in the cure of acute, high-risk leukemia in the haploidentical HSCT setting. HSCT is a life-saving therapy in high-risk leukemia. However, over 30% of patients do not find an HLA-compatible donor and cannot benefit from any other efficacious therapeutic option. The T cell-depleted haplo-HSCT was first applied by the Perugia group (M. Martelli, F. Aversa and A. Velardi) to adult AML and, soon after, by F. Locatelli to pediatric patients with high-risk AML and ALL at the “Bambino Gesù” Pediatric Hospital in Roma. In haplo-HSCT, NK cells, particularly KIR-mismatched alloreactive NK cells, mediate the graft vs. leukemia (GvL) reaction without causing graft vs. host disease (GvHD).
Thus, it became clear that donor selection was a critical step for a successful therapy. The selection of the donors with the highest proportions of alloreactive NK cells became a major point that was successfully solved in Moretta’s lab. Indeed, a direct correlation could be established between the presence and the size of the alloreactive NK cell population and the clinical outcome. The continuous improvement not only in donor selection but also in graft manipulation led to unthinkable clinical results, with 70% of patients being cured of their otherwise fatal leukemia.The meeting was impressive in showing how important is immunology in achieving practical results for improving human health, and also in highlighting the livelihood of immunological resaerch in Italy. The conference raised the interest of an audience composed not only by immunologists but also by scientists from other fields of biomedical sciences. For sure, the sentence on the wall of the Auditorium saying: “La luce della scienza cerco e ‘l beneficio” expressed its meaning.