This year’s event will host Prof. Charles A. Dinarello from the University of Colorado, Denver CO (USA).

The topic of the Lectio Magistralis held by Prof. Dinarello will be:

“Blocking IL-1 from gout to cancer”

IL‑1 beta is the most studied member of the IL‑1 Family and the properties of IL‑1 beta are relevant to a broad spectrum of inflammatory diseases. IL‑1 beta is a product of myeloid-derived cells; gene expression for IL‑1 beta is low or absent in freshly obtained human blood monocytes but increases dramatically upon stimulation with TLR ligands but also with IL‑1 itself. The importance of IL‑1 beta for inflammatory diseases can be found in a world-wide randomized, placebo controlled study in 10,061 subjects reported in 2017. Canakinumab, a neutralizing human monoclonal antibody targeting IL‑1 beta, tested the hypothesis that blocking IL‑1 beta would reduce a second cardiovascular event in high-risk patients, who survived a first heart attack or stroke. The four-year study, termed CANTOS for Canakinumab Anti-inflammatory Thrombosis Outcomes Study, met its primary and secondary endpoints and validated decades of in vitro, animal, preclinical and clinical studies on IL‑1 beta, particularly in the pathogenesis of atherosclerosis. The study also confirmed the role for IL‑1 beta in the pathogenesis of gout, osteoarthritis, diabetes and heart failure. In addition, the study showed a highly significant reduction in the incidence of and a 77% reduction in death due to lung cancer. It was not unexpected that blocking IL‑1 beta would reduce cancer, as several properties of IL‑1 beta promote cancer.

Charles A. Dinarello is Professor of Medicine and Immunology at the University of Colorado School of Medicine, and Professor of Experimental Medicine at Radboud University in the Netherlands. Professor Dinarello received his medical degree from Yale University and clinical training at Massachusetts General Hospital. From 1971-1977, he was an investigator at the National Institutes of Health in Bethesda. Dr. Dinarello serves on the editorial boards of several scientific journals and has published over 600 original research articles and 250 reviews and book chapters on cytokines, particularly on Interleukin-1, Interleukin-18, and related cytokines. He has trained over 50 investigators, many of whom are recognized experts in their fields. The Institute for Scientific Information listed Dr. Dinarello as the world’s 4th most-cited scientist during the 20 years from 1983-2002.

In 1998, Professor Dinarello was elected to the United States National Academy of Sciences, and in 2011, he became a foreign member of the Royal Netherlands Academy of Arts and Sciences. He is a member of the Board of Governors of the Weizmann Institute (Israel) and Ben Gurion University (Israel), former Vice President of the American Society of Clinical Investigation, and was President of the International Cytokine Society. He has received honarary degrees from the University of Marseille (France), the Weizmann Institute of Science (Israel), the University of Frankfurth (Germany), Roosevelt University (USA), Albany Medical College (USA), Radboud University (Netherlands), and Trinity College (Ireland).

Dr. Dinarello donates the monies from prizes to the Interleukin Foundation, a charitable foundation which he established in 2009 to support research on cytokines. 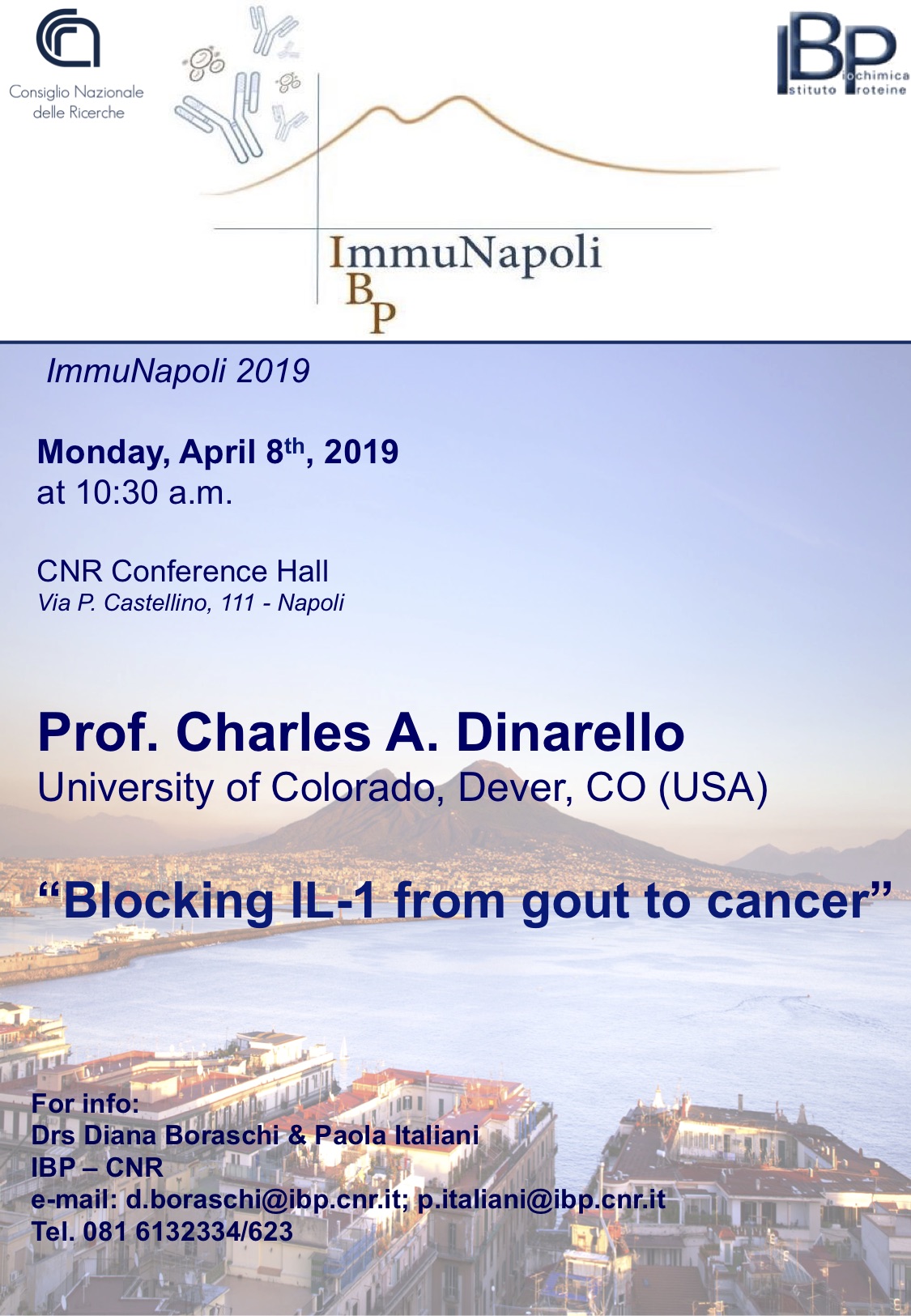