Induction of trained immunity (innate immune memory) is mediated by activation of immune and metabolic pathways that result in epigenetic rewiring of cellular functional programs. Chromatin accessibility as assessed by histone modifications at the level of promotors (H3K4me3, H3K27Ac) or enhancers (H3K4me1) is an important mechanism mediating these programs. Through network-level integration of transcriptomics, epigenetics and metabolomics data, Netea’s group identifies glycolysis, glutaminolysis, and the cholesterol synthesis pathway as indispensable for the induction of trained immunity by beta-glucan in monocytes. Accumulation of fumarate, due to glutamine replenishment of the TCA cycle, integrates immune and metabolic circuits to induce monocyte epigenetic reprogramming. Furthermore, fumarate itself induces trained immunity, with induction of an epigenomic program similar to β-glucan-induced trained immunity. Identification of the molecular pathways contributing to induction of trained immunity contributes to our understanding of innate immune memory and opens new therapeutic avenues. Finally, the use of live attenuated vaccines such as BCG can induce beneficial heterologous effects in infections and cancer. 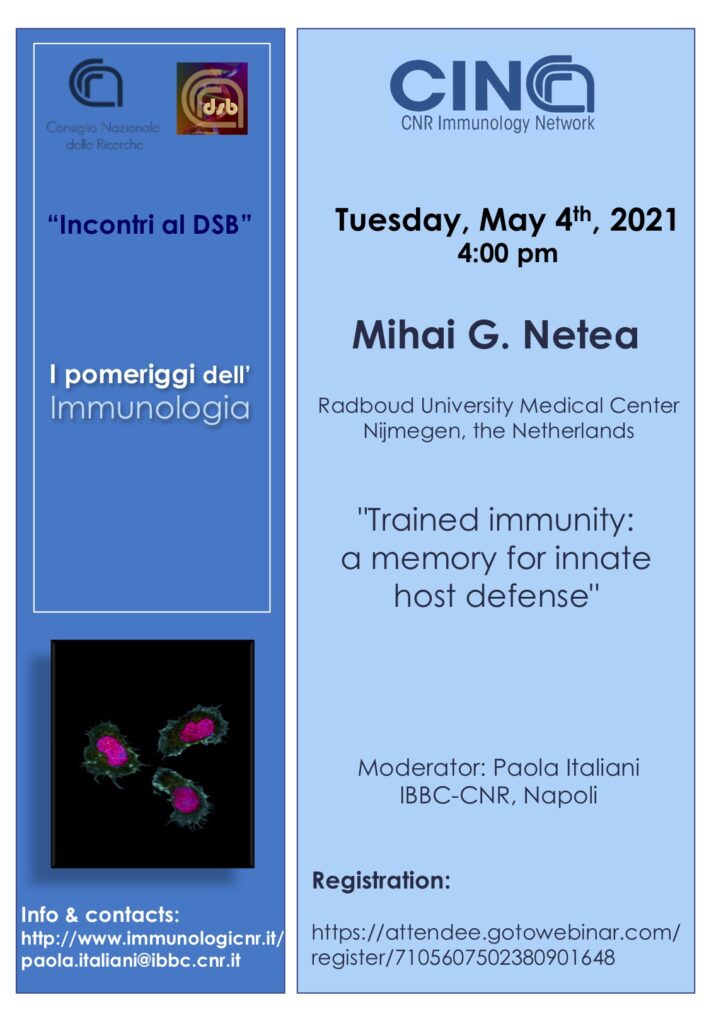 The goal of Prof. Netea’s research efforts is to translate information obtained through the assessment of human genetic variation in patients into novel diagnostic and therapeutic approaches.  His group has a strong track record on translating genetic information into understanding pathophysiological mechanisms of disease. He has a broad expertise on the host mechanisms responsible for the recognition of bacterial and fungal pathogens and the activation of the innate immune system, on the one hand, and the genetic susceptibility to infections on the other hand. Prof. Netea has described the epigenetic mechanisms mediating innate immune memory (‘trained immunity’) for the first time, and their role in vaccination, infection, immune-mediated diseases, and cancer.